Beef tenderloin is my favorite for special occasions. I wanted our Christmas Supper Club dinner to be extra special, so beef tenderloin was my pick. I’ve never been consistent with cooking it though—- overcooked it, unevenly cooked it. Beef tenderloin is meant to be a little on the rare side. I prefer medium rare. This cut is not one of Robert’s favorites because there is very little fat which usually means very little flavor especially when it’s over done.

So I started reading up on how to cook it perfectly and came across Jenny Steffens Hobick’s blog Everyday Occasions where she  posted a Slow Roasted Beef Tenderloin recipe.  Hobick cooked from the Barefoot Contessa’s recipes for a month, so the original recipe was from Ina Garten. I will add this cookbook to my Christmas list!

I know a lot of you like to cook or want to make a meal you know is going to be good.

So if you want to grab this menu go right ahead!

I remember my sister in law telling me a long time ago that if you are inviting people over, you need to go to a little bit of trouble for them. Don’t be overwhelmed by all the words on the page here! Buy the meat, season it, cook it and serve it. Just a little detail in between. You can do this.

Here are the details for the beef tenderloin. I bought 2 five pound tenderloins at COSTCO.

There were 18 of us for Supper Club and we had a nice chunk left over!

Beef tenderloin is an expensive cut of beef, so be prepared. This is what it looks like.

They were perfectly trimmed when I bought them so I didn’t need to remove any fat or silvery skin.  After removing from the package I tied each tenderloin with kitchen string so that the meat was even all the way around. I tucked both ends of each piece under and tied that section too. You’ll want to put the meat on a roasting pan and let it come to room temperature.

Here’s the deal, this is slow roasted, no searing at a high temp then turning it down. Set the oven to 275 degrees, add salt and pepper and a bit of olive oil just before you are ready to put in the oven. I put a few sprigs of thyme on each. It’s best to use a meat thermometer while cooking the meat. I was shooting for 130-135 degrees for medium rare.

Don’t forget that meat will cook a bit more once you’ve removed it from the oven.

One of our guests works at a local restaurant during busy times and he said when someone orders a filet mignon well, they call it out in the kitchen as “ruined”!

I placed the meat thermometer in the thickest part of the meat and kept watch around the one hour mark. I used the convection feature of our Thermador oven, so that made the cooking a bit faster than the original recipe. I recall the cook time to be right around an hour for both tenderloins. Just keep watching that thermometer!

I was worried it would have to cook for hours, but it didn’t.

Take the meat out of the oven and cover in aluminum foil to allow it to rest. I have mama’s old electric knife (which I LOVE) and cut the meat in 3/4″-1″ slices.

It was ridiculous how excited I was about how evenly the meat cooked!

Must have been the wine!

While the meat was napping, I dressed the salad and warmed the Twice Baked Potatoes and carrots.

You could serve the meat with horseradish sauce, pan juices or try this Blue Cheese Sauce. It was very good.

In a heavy saucepan, heat cream on medium-high heat until it is boiling.  Boil for 15-20 minutes until it has thickened enough to coat the back of a spoon.  Remove from heat.  Stir in blue cheese, parmesan, salt, pepper & parsley.  Serve warm.

free goodies straight to your inbox

This site uses Akismet to reduce spam. Learn how your comment data is processed. 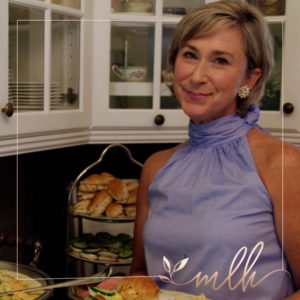